To improve the visibility of internal organs during MRI scans, contrast agents (CAs) are often used. These help to return water molecules to an equilibrium state following magnetic stimulation during MRI; in other words, CAs shorten the relaxation time of water protons and enhance the quality of the final image.

There is great interest in improving imaging of solid cancerous tumours, and researchers have been exploring the possibility of sending nanoparticle CAs to tumour sites. Now, Peng Mi at Innovation Center of Nanomedicine (iCONM) and co-workers across Japan have developed a nanoparticle CA that amplifies magnetic resonance signals in response to pH changes in solid tumours.

The team combined two key aims in their nanoparticle delivery system. Firstly, they wanted the CA to be released when the nanoparticle reached a tumour. The pH of solid tumours is lower than surrounding parts of the body, and so Mi’s team designed pH-sensitive calcium phosphate nanoparticles which disintegrate at a specified pH. Secondly, they wanted to incorporate a molecule that would trigger signal magnification upon release into the tumour. For this, the team placed manganese ions (Mn2+) into the nanoparticle’s core.

The amplification of the relaxation signal resulted in clear, high resolution imaging of tissues and tumours during trials in mice. The researchers were able to image millimeter-sized tumours and blood vessels in the mice livers within an hour of administering the nanoparticle dose, a vast improvement on current techniques. This ability to image tiny metastatic lesions before they progress to tumours means cancers could be ‘caught’ earlier, enhancing patient survival chances.

Mi’s team are hopeful that their technique will help medical professionals detect tumour hypoxia (an indication of malignancy and potential metastasis) inside the body for the first time. The new nanoparticle probe can also visualize anatomical details in an invasive manner, another key advance in the field.

Suggested image: (Fig 1a from paper or request a similar graphic from the authors) 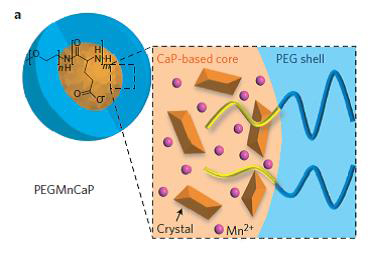 Caption: Researchers across Japan have created a novel nanoparticle contrast agent that can enhance the quality of MRI images, enabling the clear, high-resolution imaging of cancerous tumours and lesions inside the body down to millimeter scale.
About us ©2022 Kawasaki institute of Industrial Promotion All rights reserved.