Maple syrup, a concentrated sap from the maple tree Acer saccarum, is used as a sweet alternative to refined sugar across the world. Scientists are becoming interested in maple syrup as a source of beneficial compounds such as antioxidants.

Now, Keiko Abe and co-workers at Kanagawa Academy of Science and Technology, Kawasaki, together with researchers from Tokyo, Japan, have examined the effect that doses of maple syrup extract (MSX) have on liver gene expression in mice fed on a high-fat diet. Their results show that components of MSX supress liver inflammation induced by a high fat diet.

In their previous research, Abe and her team have reported the possibility that maple syrup can enhance and protect liver function in rats by supressing the production of ammonia. For their current study, the researchers used a technique called nutrigenomics to study comprehensive changes in expression of genes in the mice livers. The mice were divided into three groups; one was fed a normal-fat diet, the second a high-fat diet, and the third a high-fat diet with MSX, for a total of 8 weeks.

Abe and her team then analyzed gene expression changes between three groups. Compared with normal-fat diet group, gene expression pattern was changed in high-fat diet group. They focused on the genes which expression pattern was mitigated to normal levels by MSX ingestion. These genes were enriched in the genes related to lipid metabolism and inflammatory responses. The researchers conclude that ingestion of MSX has the possibility of mitigating liver inflammation induced by a high-fat diet feeding.

Suggested image (from http://www.thinkstockphotos.co.uk/image/stock-photo-maple-syrup/163668517) or request an alternative from the authors 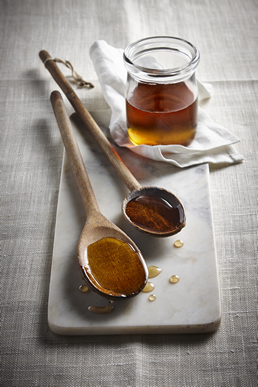 Researchers based at Kawasaki’s Kanagawa Academy of Science and Technology, Japan, have uncovered evidence that doses of maple syrup extract taken during a high-fat diet can reduce inflammation in the liver in mice.

Picture provided by Federation of Quebec Maple Syrup Producers
About us ©2022 Kawasaki institute of Industrial Promotion All rights reserved.