Pesticides used in agriculture, such as acephate and chlorpyrifos, can filter into foods grown for human consumption. Monitoring the effect of the pesticides inside the body, and in particular in the liver, has proven difficult, partly due to the lack of a feasible animal model.

Now, Hiroshi Yamazaki and co-workers at Showa Pharmaceutical University in Tokyo, together with scientists from the Central Institute for Experimental Animals in Kawasaki, Japan, have created a novel method for evaluating the toxicological potential of pesticides in the human body. Their technique uses mice with ‘humanized’ livers in combination with a physiologically based pharmacokinetic (PBPK) computer model1.

Unlike previous rodent models for liver reconstruction, the humanized mice can survive without continuous drug treatment. Yamazaki and his team replaced mice liver cells with 70% human hepatocytes, and administered both wild-type mice and humanized mice with doses of acephate and chlorpyrifos. They then followed the progress of the pesticides and their associated metabolites through the mouse bodies, examining the differences in plasma pesticide concentrations between each type.

The results gained from these experiments then allowed the researchers to compare predicted values for pesticide absorption in humans, generated by the PBPK model, with the in vivo results from the humanized mice. The PBPK model predicted that acephate would be cleared at a similar rate from both mice and humans via renal excretion; this was verified by the mouse experiments. Chlorpyrifos clearance, on the other hand, is dependent on the liver and its metabolic rate. The PBPK model predicted that chlorpyrifos would clear more slowly from humans, again concurring with the results from the humanized mice.

The combination of humanized mice results and the PBPK model provides a useful evaluation of the toxicological potential of these two pesticides in humans, when consumed either in a large accidental dose or smaller incidental doses. 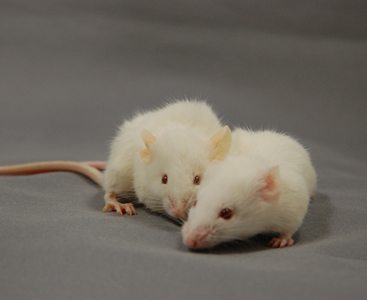 Mouse on the right is NOG and the one on the left is TK-NOG mouse.
TK-NOG mice exhibit symptoms of jaundice induced liver failure by ganciclovir administration. Tail and ears has a feature that is amber. After ganciclovir administration human liver cells can be grafted.
About us ©2022 Kawasaki institute of Industrial Promotion All rights reserved.