A dual role for protein Cdh7 in correct cerebellum development

Precise neural connectivity and the correct formation of synapses are crucial for creating and maintaining a healthy nervous system. The cerebellum – the region of the brain responsible for motor control – relies on synaptic connections between neurons to form a fully functioning circuit.

More specifically, so-called ‘mossy fibers’ convey information to the cerebellum from other parts of the brain. In order to set up this communication network, mossy fiber pontive nucleus (PN) neurons grow and reach out via axons (or nerve fibers) to connect with cerebellar granule neurons in the developing brain. This normally occurs by the third postnatal week. However, the molecular mechanism alerting the PN neurons to stop growing and establish connections with the granule neurons has not yet been identified.

Now, Hideyuki Okano and co-workers at Keio University, in collaboration with scientists at Jikei University School of Medicine in Tokyo, Japan, have shown that a protein called cadherin-7 (Cdh7) plays a dual role in stopping axon growth of PN neurons at the right time and triggering the formation of specific synapses within the cerebellum1.

The researchers showed that, once the PN neurons reach the cerebellum, Cdh7 initiates a switch from ‘axon growth’ activity to ‘synaptogenesis’ – the signal to begin specific synapse formations between the two types of neuron. When they knocked-down Cdh7 expression in another set of in vivo experiments, it resulted in severe impairment of neural connectivity in the PN neurons (see image).

The findings contribute to knowledge of neural connections and circuit formation in the developing brain. 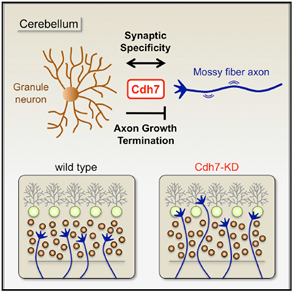 Researchers at Keio University demonstrate the role of protein Cadherin-7 (Cdh7) in facilitating the formation of correct synaptic connections in the cerebellum.
About us ©2022 Kawasaki institute of Industrial Promotion All rights reserved.