The use of tiny drug-loaded nanocarriers for the safe, targeted delivery of drugs to designated parts of the body has received much press in recent years. Human trials of nanocarriers targeting pancreatic cancer tumors, for example, have now reached phase three in a number of countries. The nanocarriers themselves are formed from self-assembling polymers, or micelles, created around a core which contains the drug. It is crucial to create micelles that are structurally robust, because they are easily affected by their surroundings en route through the body.

Now, Kazunori Kataoka and co-workers at the University of Tokyo, together with scientists across Japan and Switzerland, have completed a study into micelle cores and how internal core structure affects their ability to deliver drugs effectively in the bodies of mice.

Certain previous designs of micelle have shown defects, dissolving too soon in the body and allowing drug distribution in other organs instead of a concentrated dose reaching the target tumor. The researchers synthesized three types of micelle from a polymeric material called PEG-b-P(Glu), each with different optical activity. Two of the micelle structures formed highly ordered, regular structures in the core when combined with cisplatin, a chemotherapy drug. The third type adopted a more random core structure.

They found that the optically-active micelle with regular bundles of so-called α-helices in its core retained its structure for a prolonged period of time, limiting the risk of dilution. The highly-ordered core also helped control the release of the drug once it reached its target. This was in direct contrast to the micelle with random core structure, which disintegrated rapidly in the bloodstream of the mice.

The team believe that the careful, tailored assembly of micelle cores, as well as considered design of the surrounding protective outer shell, will help improve the efficacy of nanocarriers. 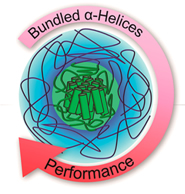 Scientists in Japan and Switzerland have shown that nanocarriers with highly-ordered, regular internal core structures (bundled α-helices) are more effective at delivering drugs to target destinations in the bodies of mice. A well-structured micelle core prevents early undesirable dissolution of the nanocarrier in the bloodstream.
About us ©2022 Kawasaki institute of Industrial Promotion All rights reserved.