Transgenics could provide treatments for genetic diseases by introducing genes that modify an organism’s characteristics. Researchers have now demonstrated transgene expression in marmosets - a non-human primate - as well as a transgenic marmoset’s offspring. The technique, as the researchers conclude in their report on the work, “may provide the means to obtain genetically modified non-human primate models for translational research, investigations of regenerative medicine and gene therapy, and clarification of the scientific gaps among transgenic mice, human disease models, and real human diseases.”

A transgene approach to knockout a cystic fibrosis gene in swine has already been demonstrated. Marmosets are genetically closer to humans than swine, and they also reach sexual maturation quickly and reproduce prolifically, which is useful for the development of transgenic technologies. However, previous efforts failed to achieve transgene expression in the cells of marmoset infants.

Researchers at the Central Institute for Experimental Animals (in Kawasaki, Japan) and colleagues developed viruses carrying an enhanced green fluorescent protein transgene, which allowed transgene expression to be determined relatively non-invasively in living embryos and animals. They injected embryos at very early stages of development and transferred the embryos that showed positive transgene expression into marmoset surrogates. Putting the cells in sucrose solution, which enlarges the space where the virus is injected, meant they could inject more of the transgene.

Five of the embryos survived to birth. Of those four showed gene expression in the hair, blood and skin cells. In addition transgene expression was also observed in the reproductive cells of one of the offspring on reaching maturity, who successfully fathered transgenic offspring, demonstrating ‘germline transmission’ of the transgene into the next generation. 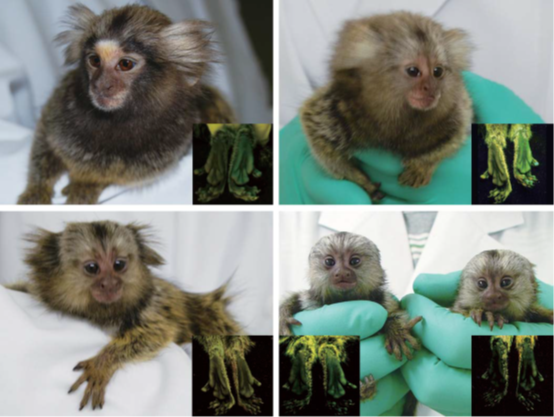 The transgenic marmoset infants are shown: 584 (Hisui) (top left), 587 (Wakaba) (top right), 588 (Banko) (bottom left), and twin infants 594 (Kei)/666 (Kou) (bottom right). Hisui, Wakaba and Banko were injected with EGFP that had a different type of viral vector and promoter to that injected into Kei and Kou. Inset boxes in each panel show epifluorescent images of the paw of the transgenic animal (right), compared to a wild-type animal’s foot pad (left). All animals except Banko expressed EGFP in their paw. Kou expressed EGFP at a slightly lower level but also fathered transgenic offspring.
About us ©2022 Kawasaki institute of Industrial Promotion All rights reserved.