Studying the complexities of brain development over time is challenging, mainly because of the difficulties inherent in gathering data on the brains of live specimens. Until recently, investigations into non-human primate neurology required specimens to be destroyed prior to study. A complete developmental sequence of a living primate brain would dramatically enhance our knowledge of how the brain develops.

Now, Hideyuki Okano and co-workers at Keio University School of Medicine, Tokyo, together with colleagues at the Central Institute for Experimental Animals, Kawasaki, and other institutions across Japan, have successfully created a 3D ‘atlas’ of common marmoset, a new world monkey, brain development, from fetal to adult stage, using non-invasive imaging technology.

Marmosets are used as a model for studying the brain because their central nervous system is very similar to humans in terms of organisation and structure. Okano and his team used two forms of magnetic resonance imaging (MRI) to compile a full atlas of brain development in marmosets. This included MRI scanning of the uterus for mapping fetal development, alongside magnetic resonance histology for 3D images of the brain through to adulthood. This new technique could feasibly be used to track both innate and external influences on brain development without the need to destroy specimens – a clear benefit for the study of endangered species, for example.

The resulting brain atlases allow scientists to study multi-dimensional data about the brain over time, as well as incorporating data about whole body development. The team hope to create more complex atlases in future, incorporating segmented brain structures and larger scale population studies. It is also now possible, thanks to a recent study by the same researchers, to genetically modify marmosets in order to study the progression of neuro-developmental disorders. The team also hope to pinpoint the genes responsible for correct non-human primate brain development and organisation. 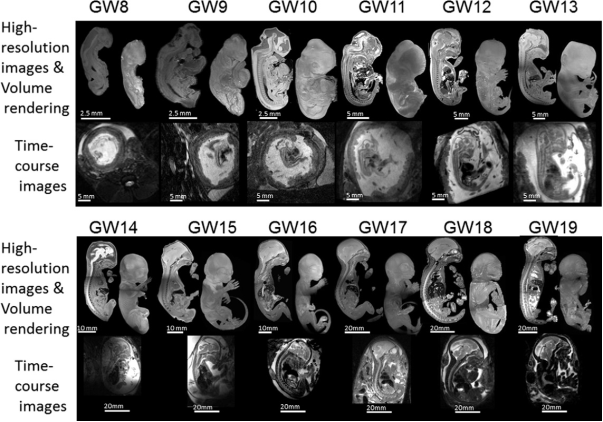 New, non-invasive in utero MRI scanning has allowed researchers connected with the Central Institute for Experimental Animals in Kawasaki to construct the first 3D atlas of primate brain development. The above image shows the development of a marmoset fetus in the womb, from gestational week 8 to 19.
About us ©2022 Kawasaki institute of Industrial Promotion All rights reserved.