The delivery of therapeutic agents for the treatment of intractable diseases faces a number of biological barriers, such as limited extravasation, poor tissue penetration or drug resistance. A promising solution to these obstacles uses nanocarriers to transport bioactive substances directly to target sites. Side-effects can then be minimised by narrowing down the agent release to the relevant areas by means of spatiotemporally controllable triggers.

So far, successful tests have been performed only in vitro. Now, a team of researchers led by Kazunori Kataoka of the University of Tokyo have reported on successful in vivo gene transfer to solid tumours by means of light-responsive nanocarriers.

To pinpoint drug release, the team used photochemical internalisation — a process triggered by laser light that results in the disruption of the endo-/lysosomal membrane of photosensitised nanocarriers, thereby releasing the genes in a controlled fashion. The greatest challenge the researchers faced resided in the need to compartmentalise the cargo molecules, because the gene-carrying plasmid DNA could be damaged if put in contact with the photosensitizing compounds.

The solution came from using a sequential self-assembly technique which leads to the creation of spatially segregated three-layered compartments in a single ternary polymeric micelle. The core compartment harboured the genes, the intermediate layer hosted the photosensitive trigger and finally the external layer formed a shielding surface.

To verify the drug delivery in vivo to a subcutaneous tumour in a mouse, the therapeutic DNA was modified with a fluorescent reporter gene. After intravenous injection of the nanocarriers, the photo-irradiated tumour showed a 4.4 fold increase in fluorescence as opposed to the non-irradiated ones — demonstrating the successful gene transfer after systemic administration. The concept behind the three-layered micelle engineered by Takahiro Nomoto et al. holds great potential for future developments of drug delivery via macromolecular compounds. 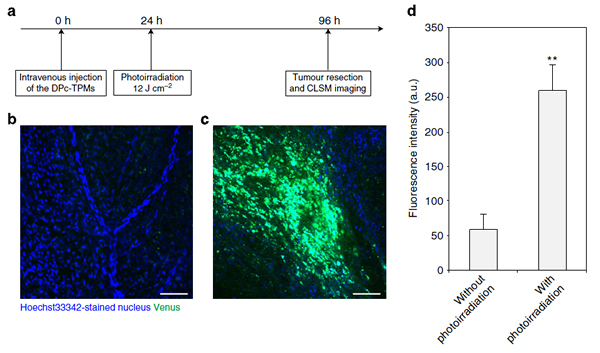 In vivo transfection into a subcutaneous tumour: (a) A scheme showing in vivo transfection. (b,c) Ex vivo cofocal laser scanning microscopy images of the tumours (b) without photoirradiation and (c) with photoirradiation. A Hoechst 33342-stained nucleus and Venus fluorescence are shown in blue and green, respectively. Scale bars, 100 mm. (d) The Venus fluorescence intensity was quantified from the images after subtraction of the background intensity. The results are expressed as means ± s.e.m. (n 1⁄4 5 mice for tumours without photoirradiation and n 1⁄4 6 mice for tumours with photoirradiation). **P<0.01 (t-test).
About us ©2022 Kawasaki institute of Industrial Promotion All rights reserved.