Observation of brain activity in the awake state is of great interest to scientists, particularly those studying progressive neurological disorders. Marmosets, small primates inhabiting South America, are very useful animal model for neuroscience research because of ease of handling with a small body size and high reproductive rate, but until recently it has proven difficult to image animal brains in awake state.

Yoshifumi Matsumoto and co-workers at Kawasaki’s Central Institute for Experimental Animals, in association with RIKEN in Japan, have demonstrated a novel imaging methodology suitable for carrying out neuronal imaging in awake marmosets. The team designed a novel device to fix a marmoset’s body under two kinds of microscopes such as epifluorescence and 2-photon microscopy and systematic acclimation training to the device.

These methods minimized the motion artefact on the images, which can affect the clarity of macroscopic and cellular features. Subjected marmosets were mounted a cranial window, and areas of the brain sensitive to sensory stimulation were injected with a neuron-targeting virus carrying a Ca2+ indicator, which emits a fluorescent signal when neural activity occurs.

The team investigated the responses evoked by tactile stimulation to the foot, leg or tails under awake state and clearly indicated the differences of responsive area called “somatotopic map”. They further uncovered significant differences between anesthetized and awake condition in the brain activity and the spatial pattern of sensory responses.

They succeeded in chronic imaging of brain activity in response to tactile stimulation over several weeks. Their breakthrough holds significant implication for studying of neurodegenerative disorders such as Alzheimer’s disease and Parkinson’s disease. 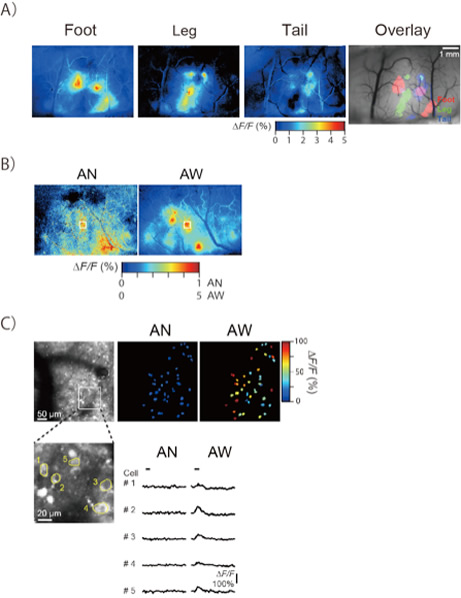 A) Somatotopic representation evoked by tactile stimulation to different body parts (Foot, Leg and Tail) by epifluorescence microscopy. Each response areas were overlaid on the image of the cortex with different colours (responses to foot in red, leg in green and tail in blue). ΔF/F: fluorescent intensity changes.

B) Macroscopic activity evoked by tactile stimulation to foot in the somatosensory cortex under the anesthetized (AN) and awake (AW) states. The activity area and peak amplitude evoked by electrical stimulation in awake state was obviously clearer than that in anesthetized state.

C) Cellular sensory responses in awake and anesthetized marmosets by 2-photon microscopy. (Upper left) 2-photon imaging of Ca2+-expressing cells in the foot-responsive region identified by epifluorescence microscopy (Figure B). (Upper middle and right) Stimulation-evoked activity maps (left: anesthetized and right: awake condition) of the field of view with pseudo-colored peak amplitude during stimulation. The peak amplitude evoked by electrical stimulation were clearly different between anesthetized and awake condition. (Bottom left) An expanded image of a white box in the upper-left image. The bottom-right traces indicate fluorescent intensity changes (ΔF/F). The neural responses (#1 to #5) could be observed in awake state. Black bars represent stimulation period.
About us ©2022 Kawasaki institute of Industrial Promotion All rights reserved.