The dawn of mRNA-based therapeutics for brain diseases

The progressive dementia suffered by patients with Alzheimer’s disease (AD) affects millions of people globally each year and puts considerable strain on healthcare services. The mechanisms behind AD are not yet clear, and there are no effective therapies available to fully tackle the disease.

Scientists know that one particular protein, amyloid-beta (Aβ), is over-expressed in AD patients and accumulates in plaques in the brain, disrupting normal functions. In addition, memory loss is thought to be connected with soluble Aβ depositing as insoluble Aβ plaques and infiltrating key parts of the brain. Breaking the connections between these two forms of Aβ may be one way of tackling AD. One protein capable of degrading Aβ is neprilysin (NEP), but this would need to be introduced to the brain via the challenging process of gene introduction.

Now, Keiji Itaka and co-workers at the University of Tokyo have pioneered a safe way of introducing NEP to mouse brains by delivering NEP-carrying mRNA to the brain inside polyplex nanomicelle carriers. Their results may herald the dawn of a new era of targeted therapeutics for AD and other brain diseases.

Nanomicelles are tiny, self-assembling molecular structures that can carry drugs in their core, only dissolving to release their load when they reach target sites in the body. The nanomicelles developed by Itaka’s team degrade into non-toxic metabolites after releasing the mRNA into the brain’s cells, meaning the procedure is lower risk than other gene delivery methods.

After testing the nanomicelle carriers in cell cultures in the laboratory, the researchers trialled their mRNA carrying system in vivo via an infusion directly into the brains of mice. They found that the nanomicelles successfully introduced NEP mRNA to all target tissues, and found protein levels were boosted across the brain. This resulted in a significant decrease in Aβ concentrations – the first study to demonstrate the therapeutic potential of introducing treatment to the brain via mRNA. 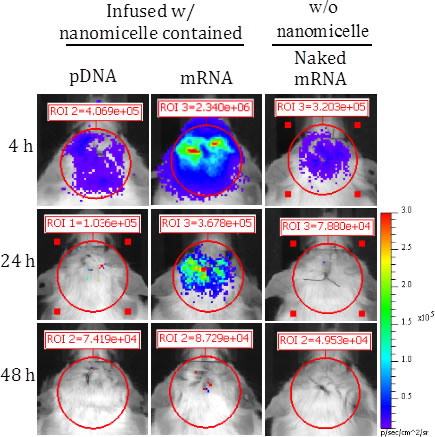 mRNA administration into the brain: Intraventricular injection of mRNA encoding luciferase.
About us ©2022 Kawasaki institute of Industrial Promotion All rights reserved.