Generating and managing intellectual property is an important aspect of research and development (R&D), traditionally carried out in industrial laboratories. At the same time, innovation is often achieved through collaboration between academia, industry and government. Optimal intellectual property management is then far from straightforward because of the different actors involved, all having different specialties and operating in different settings. Now, Shuto Miyashita and colleagues from the Kawasaki Institute of Industrial Promotion have done a case study of a publicly funded university–industry–government R&D collaboration, resulting in a suggested strategy for optimizing intellectual property management in such a context.

The researchers looked at the Funding Program for World-Leading Innovative R&D on Science and Technology (FIRST) that ran in Japan from 2009 to 2013. The FIRST program provided R&D funding for Japan’s top-30 researchers, with a focus on innovations for international industrial competitiveness. To find out which factors promote or prevent the successful creation of intellectual property, the scientists first examined the patents that came out of the program. They mapped out collaborations between the inventors behind the patents from the best practice in terms of intellectual property creation (NanoBio First), resulting in a co-inventor network from which the key actors could be identified.

Miyashita and colleagues noted that one individual, ‘Inventor 33’, occupied a central position in the network. This person was chief science officer for a startup founded by the project leader; this startup played a very active role in the creation of intellectual property. The researchers interviewed project leader, from which it became clear that, for intellectual property management to be successful, project participants need to have the right business-oriented mindset. This can be obtained through on-the-job training. Of particular importance is the ‘reciprocal mindset’, supporting a model of innovation wherein the social implementation of a future technology is taken into account right from the start in the R&D cycle.

The scientists also addressed issues related to the ‘information asymmetry’ inherent to a knowledge consumer/producer setting: the consumer (industry and/or the funder) does not a priori have access to the knowledge developed by the producer (project participants). The first problem is that of adverse selection: the consumer may prefer producers that simply develop the largest numbers of patents —these knowledge producers tend not to have the reciprocal mindset. The second issue is that of moral hazard: producers may have a sloppy attitude towards patent application and prosecution, the risk of which mainly affects the knowledge consumer. Miyashita and colleagues found that the two problems can be tackled by cultivating the reciprocal mindset, by setting up a dedicated startup, and by providing researchers contracts that include sufficient R&D funding and incentives for the creation of intellectual property.

The work by the Kawasaki Institute of Industrial Promotion scientists provides valuable suggestions for improving intellectual property management. Still, as Miyashita and colleagues point out, their study has some limitations: it is based on a single case, it is not mathematically rigorous, and R&D outcomes possibly being trade secrets is not accounted for. In the words of the scientists: “An improved model will facilitate analyses of decision-making in more complex situations.” 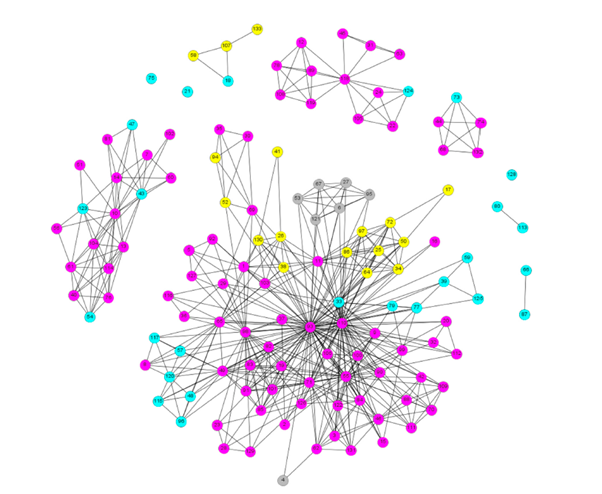 Figure: [Fig. 2 from the original article]
Co-inventor network of patents. Inventor 33 occupies a central position.
About us ©2022 Kawasaki institute of Industrial Promotion All rights reserved.