The concept of nanomedicines involves the use of nanoparticles for transporting pharmaceutical substances to intended tissues. Nanomedicines have successfully been applied to deliver a wide range of therapeutic and diagnostic agents to specific target tissues. However, nanomedicines are subject to biological processes referred to as ‘clearance mechanisms’ that act against nanoparticles, which are seen as ‘foreign particles’ by the human body.

One such mechanism is found in liver scavenger endothelial cells (LSECs), which line the wall of liver blood vessels, abundantly expressing ‘scavenger receptors’ that can capture foreign particles including nanomedicines, and remove them from the blood circulation.

Now, Kazunori Kataoka, Director General of the Innovation Center of NanoMedicine (iCONM) administered by Kawasaki Institute of Industrial Promotion, and his team from iCONM, and collaborators at the National Institute of Quantum and Radiological Science and Technology (QST) and Department of Bioengineering, School of Engineering, The University of Tokyo, report on the successful suppression of the clearing mechanisms of LSECs by applying a stealth coating agent to liver blood vessels that inhibits the scavenger receptor activity, as a result, nanomedicines are no longer captured by the liver before being delivered to specific organs (Figure 1).

The idea of ‘stealth coating’ of nanomedicines has been widely used to suppress LSEC-mediated clearance. However, depending on the formulation and drug type, it is often difficult to obtain sufficient stealthiness of nanomedicines to completely inhibit LSEC clearance. To address this issue of LSEC-mediated capture, previous studies have attempted to saturate scavenging functions of LSECs by preinjecting empty nanoparticles and scavenger receptor inhibitors such as polyinosinic acid. However, receptor saturation strategies often induce inflammatory responses, hence they are not clinically viable. Furthermore, scavenger receptor inhibitors block only the specific receptor that they target even though LSECs have different types of scavenger receptors, which often recognize the same nanomedicine, implying that various clearing mechanisms need to be inhibited simultaneously. To overcome these issues, Kataoka and his team developed an approach to block the diverse clearance pathways of liver sinusoidal scavenger walls by coating them with polyethylene glycol (PEG), the first -of-its-kind strategy in the world.

The PEG coating must satisfy two primary requirements. First, the coating must be selective to the liver sinusoidal wall because coating to extra-liver blood vessels not only causes adverse toxicity but also decreases the amount of nanomedicines delivered to target organs. Second, the coating must be temporary as long-term coating affects normal liver functions. To meet these prerequisites, the team precisely designed a coating agent with two-armed PEG conjugated to positively charged oligolysine (two-arm PEG−OligoLys) (Figure 1A), which demonstrated selective coating to the liver sinusoidal wall, leaving other tissue endothelium uncoated, thus accessible to the delivery of nanomedicines. Interestingly, the two-arm PEG−OligoLys coating is gradually removed from the wall and is excreted to the bile within six hours, while its counter variant one-armed PEG−OligoLys do not de-coat the wall. Therefore, the precise molecular design of the two-arm PEG−OligoLys satisfied both selective and transient stealth coating.

The selective and transient liver scavenger wall stealth coating by the two-arm PEG−OligoLys efficiently prevents the sinusoidal clearance of both viral and nonviral gene vectors, representatives of nature-derived and artificially-engineered nanomedicines, respectively, thereby boosting their gene delivery efficiency in the target tissues (Figure 1B). Despite the clinical success of viral vectors, liver sinusoidal capture drastically hinders the ability of viruses to reach their target organs, thus resulting in the use of high viral dose—often leading to death humans—to obtain a therapeutic level of protein expression.

Quoting the scientists: “Our approach is versatile for combinational use with various nanomedicines, including synthetic and nature-derived nanomedicines, opening avenues for future nanotherapy and nanodiagnosis.”

Figure: [Fig. 1 from the original article] 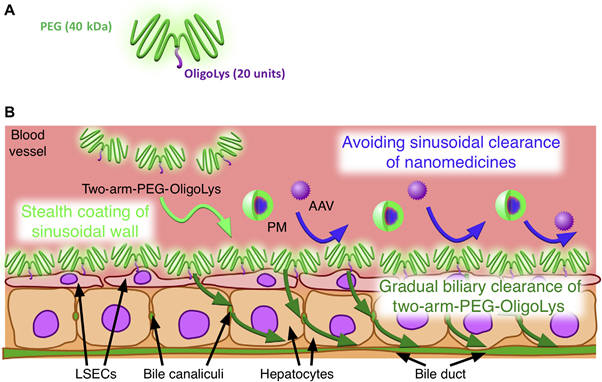 Figure 1. In situ stealth coating of liver sinusoidal wall. (A) OligoLys with 20 Lys units conjugated with two linear chains of 40-kDa PEG at its carboxyl end (two-arm-PEG-OligoLys). (B) Schematic illustration of stealth coating of the liver sinusoidal wall with two-arm PEG−OligoLys and its gradual excretion to the bile. This transient PEG coating inhibits the capture of nanomedicines, such as polyplex micelle (PM) and adeno-associated virus (AAV), by the liver blood vessel walls and thus retarget the nanomedicines to their intrinsically targeted organs.
About us ©2021 Kawasaki institute of Industrial Promotion All rights reserved.