Parkinson’s disease (PD) is the second most common neurodegenerative disorder, implicating 10 million people worldwide but has no cure at present. The main reason for this is the difficulty scientists face with replicating damage seen in the parkinsonian brain, in the laboratory. Yoshikuni Tabata, Hideyuki Okano and their team at Keio University have developed a model to understand PD better, using induced pluripotent stem cell (iPSC) technology.

iPSCs are mature cells that can be manipulated to grow into specialized cells in the body, such as kidney, liver or brain cells (neurons). This technology has been exploited in regenerative therapy. Tabata and colleagues used iPSCs derived from PD patients with a specific gene mutation (called as PARK2). The iPSCs were manipulated by a process known as differentiation, into dopaminergic neurons; the subtype of neurons which are damaged in PD. Thus, the same neurons found damaged in the patient brain, were now present in the laboratory.

The primary toxic pathway involved in PD is oxidative stress; it leads to accumulation of toxic chemicals in the neurons which endogenous antioxidants can no longer combat. The differentiated PARK2 mutant neurons, indeed had high levels of oxidative stress. They were also susceptible to death induced by exposure to rotenone, an insecticide known to damage the mitochondria and cause PD. This suggested the role of the healthy (non-mutated) PARK2 gene in maintaining oxidative balance and protecting the mitochondria.

The research team then chose a panel of drugs with varying mechanisms, to assess their effects in PARK2 related PD. Candidates were shortlisted based on their ability to protect these neurons against rotenone-induced death. A type of calcium channel antagonist, showed great promise in this regard. Such compounds stabilize calcium levels in the cell, by blocking their influx through specific channels, known as T-type calcium channels. These effects were also confirmed in another PD specific mutation (PARK6) stem cell line, showing very similar properties to PARK2. The role of the T-type calcium channels in causing neuron death in PD, thus came to light.

This study provides a promising model for mimicking the damage occurring in parkinsonian brains. The authors conclude, “this model can be used to investigate the pathogenesis of the disease and search for potential therapeutic targets for PD”. True advances can only be made once accurate depiction of any disease is achievable. 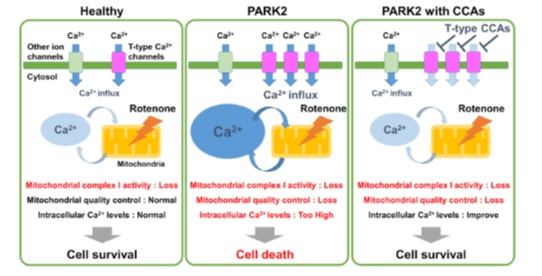