Retinal degeneration, a pathology in which the cells in the retina progressively die, leads to impaired vision and, in some cases, blindness. A promising therapeutic option for the treatment of retina degeneration consists of transplanting retinal tissue derived from embryonic or induced pluripotent stem cells (ES/IPS cells).

The researchers transplanted retinal sheets derived from human embryonic stem cells in one of the models, characterized the structure of the transplanted retina and of the host-graft interface and measured the response to light. The retinal sheets were integrated for a long period of time, and showed signs of photoreceptor maturation, including the formation of light-responsive inner/outer segments and of synapses. A full-field electroretinography response was not detected (this measures the electrical responses of various cell types in the retina, including the photoreceptors, inner retinal cells, and the ganglion cells), but this does not necessarily imply total blindness. By contrast, retinal ganglion cell responses to light stimuli were observed in 3 transplanted retinas out of 7 that were measured. Thus, there was some indication of a functional integration of the transplanted tissues with the host retina, even though less successful than with mouse-derived stem cells in these mice models.

As the authors conclude, “this study supports the use of these animals in preclinical studies, as well as the competency of human embryonic stem cell retina for future clinical applications in retinitis pigmentosa patients”. 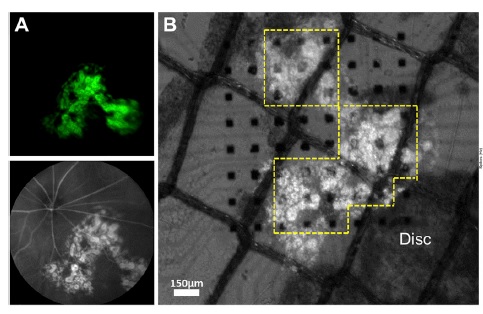 Classic Photoreceptor Responses Elicited in NOG-rd1-2J Mouse after Transplantation of hESC-Derived Retina (A) In vivo imaging of a transplanted eye at postoperative day 112 (DD176).
Fluorescent angiography shows the Crx::venus-positive graft under the retinal vessels. No sign of rejection was observed. (B) Isolated retina from (A) with Crx::venus hESC-derived graft (DD204) mounted on the MEA probe with RGC on the electrodes side.